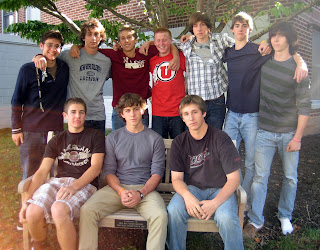 New Hope-Solebury High School golfer, Raleigh Chapin, will be competing in the Pennsylvania State Golf tournament at Heritage Hills Golf Club in York, PA on October 25 and 26. Chapin, a junior, shot a two over par 74 to tie for ninth place in the Pennsylvania Southeast Regional High School golf tournament in Fleetwood, Pennsylvania on October 19. This is only the second time that New Hope-Solebury High School has had a golf team member advance to the state level.
In addition to Chapin, senior brothers Jake and Mike Merana also competed in the regional championships. They missed advancing to the states by just 3 strokes and Mike was one of ten golfers in a playoff for the final spot. The team, overall, took second place in districts, ahead of BAL Champion Holy Ghost and the remainder of the Suburban One League.
Posted by Mary Schwander at 8:41 AM