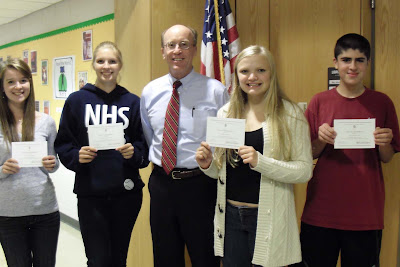 Principal, Stephen Young, of New Hope-Solebury High School announced this week that Scott Bouloutian, Stephanie Hunter, Caitlin Kerr, and Maura Schlussel have been named Commended Students in the 2011 National Merit Scholarship Program. Letters of Commendation from the school and National Merit Scholarship Corporation (NMSC), which conducts the program, were presented by the principal to these scholastically talented seniors.
About 34,000 Commended Students throughout the nation are being recognized for their exceptional academic promise. Although they will not continue in the 2011 competition for Merit Scholarship awards, Commended Students placed among the top five percent of more than 1.5 million students who entered the 2011 competition.
Posted by Mary Schwander at 1:00 PM